I have recently - or I should say in the last several months - become fascinated by fungi. The majority of people have no idea how important and intelligent (seriously) mushrooms are. Beneath our feet lies an almost unimaginably intricate network of mycelia, trading nutrients with plants for energy, transporting nutrients from tree to tree, and helping to heal and detoxify whole ecosystems.


Here are a few short exerpts from an interview with expert on mycelia and author of such books as "Mycelium Running: How Mushrooms Can Help Save the World", Paul Stamets, about the secret world of the Mycelial network; Nature's internet.


Jensen: "Almost since life began on earth, mycelia have performed important ecological roles: nourishing ecosystems, repairing them, and sometimes even helping create them. The fungi’s exquisitely fine filaments absorb nutrients from the soil and then trade them with the roots of plants for some of the energy that the plants produce through photosynthesis. No plant community could exist without mycelia. I’ve long been a resident and defender of forests, but Stamets helped me understand that I’ve been misperceiving my home. I thought a forest was made up entirely of trees, but now I know that the foundation lies below ground, in the fungi."


Stamets: "There are an estimated one to two million species of fungi, of which about 150,000 form mushrooms. A mushroom is the fruit body — the reproductive structure — of the mycelium, which is the network of thin, cobweblike cells that infuses all soil."


"A mycelial “mat,” which scientists think of as one entity, can be thousands of acres in size. The largest organism in the world is a mycelial mat in eastern Oregon that covers 2,200 acres and is more than two thousand years old. Its survival strategy is somewhat mysterious. We have five or six layers of skin to protect us from infection; the mycelium has one cell wall. How is it that this vast mycelial network, which is surrounded by hundreds of millions of microbes all trying to eat it, is protected by one cell wall? I believe it’s because the mycelium is in constant biochemical communication with its ecosystem."


"I think these mycelial mats are neurological networks. They’re sentient, they’re aware, and they’re highly evolved. They have external stomachs, which produce enzymes and acids to digest nutrients outside the mycelium, and then bring in those compounds that it needs for nutrition. As you walk through a forest, you break twigs underneath your feet, and the mycelium surges upward to capture those newly available nutrients as quickly as possible. I say they have “lungs,” because they are inhaling oxygen and exhaling carbon dioxide, just like we are. I say they are sentient, because they produce pharmacological compounds — which can activate receptor sites in our neurons — and also serotonin-like compounds, including psilocybin, the hallucinogen found in some mushrooms. This speaks to the fact that there is an evolutionary common denominator between fungi and humans. We evolved from fungi. We took an overground route. The fungi took the route of producing these underground networks that are highly resilient and extremely adaptive: if you disturb a mycelial network, it just regrows. It might even benefit from the disturbance.


I have long proposed that mycelia are the earth’s “natural Internet.” I’ve gotten some flak for this, but recently scientists in Great Britain have published papers about the “architecture” of a mycelium — how it’s organized. They focused on the nodes of crossing, which are the branchings that allow the mycelium, when there is a breakage or an infection, to choose an alternate route and regrow. There’s no one specific point on the network that can shut the whole operation down."

Now, these small chunks, should you choose to read them (in other words, should you have a burning interest in a seemingly irrelevent topic that doesn't interest most people in the slightest, as i happen to =P) may not reveal any mind-blowing truths to you. It was difficult to find specific chunks of text that conveyed the entire message of the interview.

The jist is, all fungi release spores (spores are like their seeds), which float around and eventually settle on the ground. When a male and a female mycelial spore touch, they begin to form a network, that can span many miles, across entire forests and beyond given enough time. There can also be multiple networks in the same area because each year/season, leaves and dirt obviously accumulate, and then more spores float down, creating another network overtop of it, and so on and so forth. Through these networks, the mycelia can do amazing things such as transport nutrients from a thriving tree to a dying tree many miles away. They also, as mentioned previously, trade nutrients with plants for their photosynthesized energy, creating a symbiotic relationship between the mycelia, the plants, and the trees. And that's how a forest really works.


Here's to seeing the forest for the fungi :) YAY FUNGI!! lol 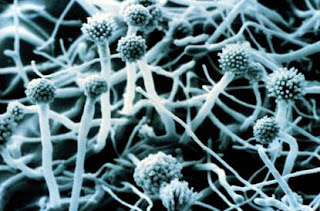 Here's the rest of the interview, for anyone interested.
http://peakenergy.blogspot.com/2008/07/natures-internet-vast-intelligent.html
Posted by JBirch22 at 10:42 AM

Visits from my friends